The Black rose -- this subspecies (Pachliopta aristolochiae antiphus) was not recorded by the earlier author or researchers in Peninsular Malaysia & Singapore.

According to the record, in Singapore, it was first sighted some time back in 1995 by Steven Neo, who captured a specimen at Venus Drive. It was an all-black specimen, without the white hindwing markings. The red spots and abdomen were quite typical of the Common Rose ssp asteris but smaller or fewer with a slightly different shape.

Starting from year 2004, this species become a more commonly found "Common" Rose species in Singapore and more sighting has been reported since then.

Simon Chan from NSS Butterfly Interest Group first highlighted in the Nature news in Mar 2007 that, the Black Rose could be the Bornean subspecies antiphus and not the usual asteris.

While I'm not too sure who make the final decision that it's indeed the subspecies antiphus, I did manage to take the opportunity to collect an egg of this Black Rose & breed it to adulthood. 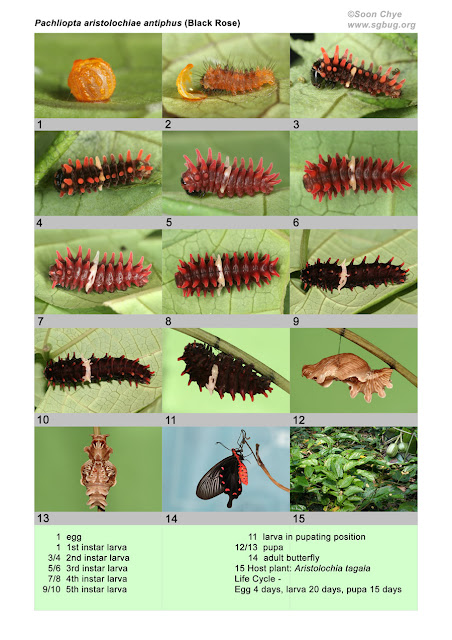